I created this Spot 10 Differences puzzle in the honor of RAID's Roric Wyrmbane - the current ongoing champion fusion.

I made it difficult to make it challenging for you. It is always hard to get the balance right because there are so many different RAID players. Some solve the puzzles very quickly while others struggle so it is hard to please everyone. I did my best - hopefully you will enjoy.

Feel free to post in the comments below if you managed to solve this Roric Wyrmbane puzzle.

And best of luck to you with the ongoing fusion. If you need any support with it please refer to this blog post where you can find fusion calendar and info from different content creators.

Finally, as you probably know, you can click on this, or any other, picture in my RAID Shadow Legends blog to see it bigger - this helps especially with puzzles like this. 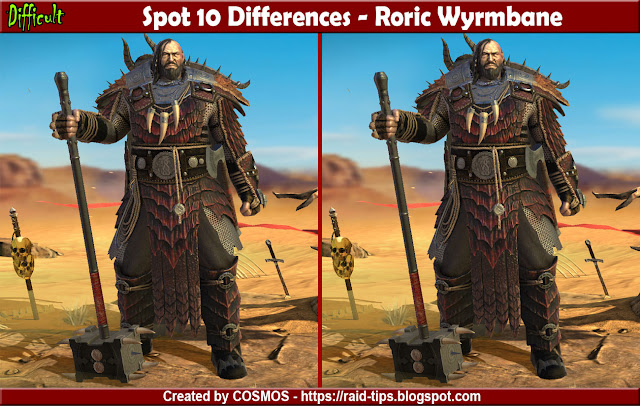 at September 15, 2021 No comments:
Email ThisBlogThis!Share to TwitterShare to FacebookShare to Pinterest
Labels: Fun/Funny

This is just some RAID Shadow Legends fun by me: Benefits of wearing candles on and around your helmet: 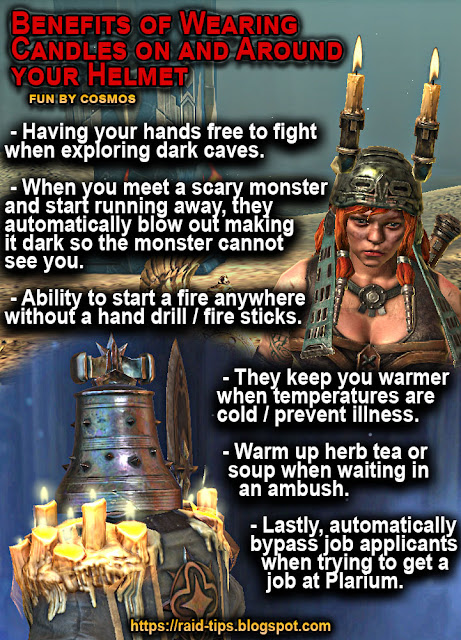 Sometimes, in RAID Shadow Legends, you just have to make fun of things :)

at September 13, 2021 No comments:
Email ThisBlogThis!Share to TwitterShare to FacebookShare to Pinterest
Labels: Fun/Funny

From all the different posts I have read about beating Bommal the Dreadhorn in RAID Doom Tower, I have chosen 3 very good ones to share with you here:

This is a great team combination by MurderInc with relatively accessible champions compared to other teams proposed by other people.

Much weaker versions of this team and/or replacement champions could be used for lower Dreadhorn levels, but the higher you go the more insane this boss becomes so significantly more effort is required.

Here are the stats he posted: 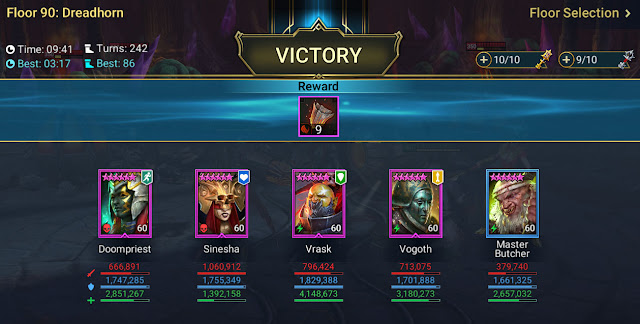 This is again a full auto team without any Legendary champions. It is a variation of his first post. 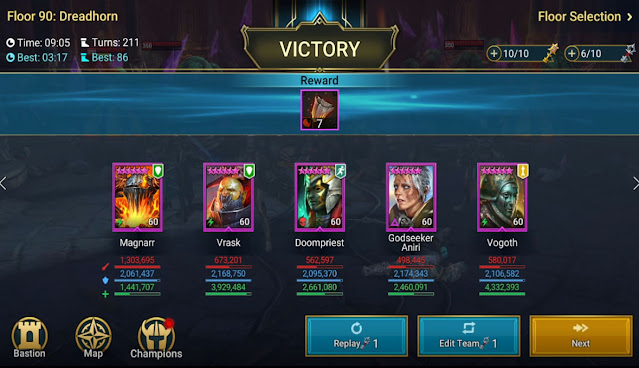 This is a totally different concept team where you strangely want to have as many bombs as possible!

The whole point here is that the Vogoths heal everyone on the bomb damage with support of Vrask and Visix's job is to reduce the Turn Meter as often as possible to spawn more bombs so the team can heal as fast as possible protecting against the boss himself.

Here is the link to his video where he explains it: https://youtu.be/gj0g52HXZ80 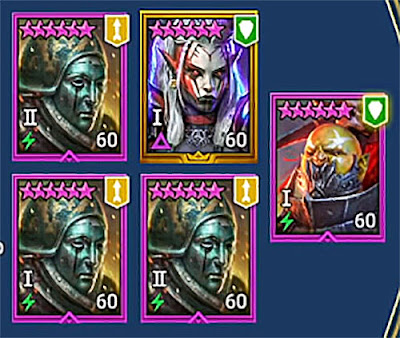 It is also possible to win against Bommal the Dreadhorn with Samar. The reason I am mentioning this at the end is because the champions prepared for the above teams are actually also useful in other parts of the game while Samar was "defined" as a useless champion and only became viable for Bommal due to Plarium's horrible implementation.

While there are people to prepare Samar for only this purpose it is widely acknowledged that he is useless elsewhere in the game and that's why I posted the above teams first. But for the record here is a build with Samar by investoreba1.

Please note when people say "solo Samar" they mean that the main champion is Samar but you do need a weaker supporting team for the Leadership bonus and for champions to die to get bonus from Masteries.

In the below team:

at September 12, 2021 No comments:
Email ThisBlogThis!Share to TwitterShare to FacebookShare to Pinterest
Labels: Guides & Tips

I have been improving my champions from the untuned team I reported on previously and instead of Nightmare Clan Boss I have been doing Ultra-Nightmare Clan Boss. It was taking 4 keys a day to get the top chest, which was challenging timing-wise since I cannot miss any key.

Today I thought I might manage it in 3 keys but alas I scored 69.93M damage as you can see from the screenshot below. This is so close to the chest requirement of 70.27M damage! I almost did it in 3 keys :)

Did you have a similar case like this where you were just a tiny little bit less than required?

I am not mad or anything, I should still improve a lot as there is also the RNG and different Affinities so a lot has to improve before I can comfortably go over 70M with less keys.

I also hope I managed to pull from shards the champions I need to change from my untuned team to a speed-tuned team so I can do 2 key UNM or even 1 key.

at September 10, 2021 No comments:
Email ThisBlogThis!Share to TwitterShare to FacebookShare to Pinterest
Labels: Clan Boss

I prepared an analysis chart to share with you regarding guaranteed champion summons in RAID Shadow Legends.

You can see on the chart below multiple interesting pieces of information: 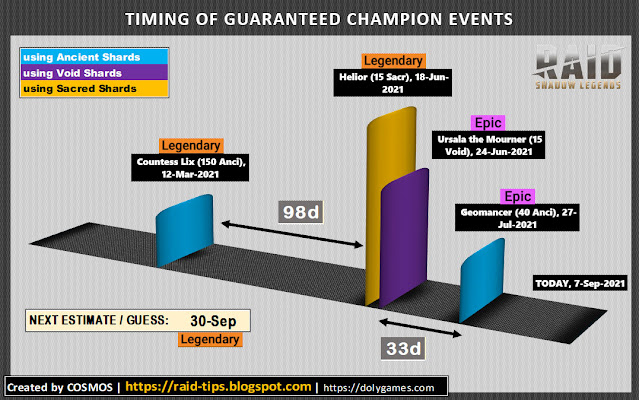 Guides by different people for the Roric Wyrmbane fusion:

I will add more as I find them or if you find feel free to post in the comments. Update: already 4 different ones added, I think is enough :)

BGE usually does fusion guides, but I don't find it yet for Roric Wyrmbane, will add it as soon as I see it: Update: ready:

They will probably update this page later, so adding it already now:

Today I achieved a comfortable (46 mil) 1 key Nightmare Clan Boss with my untuned Clan Boss Team. I posted previously (here) about achieving 40 mil 1 key NM but that was borderline and a less reliable team while today's achievement was very safe/comfortable and repeatable. 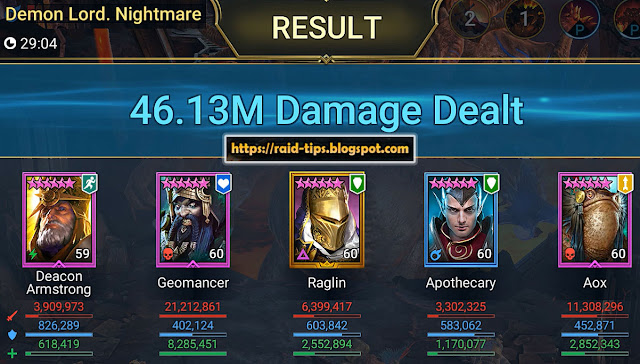 I am not making this post to recommend untuned teams, just to say that it is possible and if someone feels lazy or does not have time or does not want to learn speed tuning then they can still achieve 1 key NM without any great requirements.

Recorded short video of it

Not to waste your time, I recorded a short video just showing the last turns of the battle and the champions with their equipment / stats. You can check it on my RAID YouTube channel or here:

How does this same team perform on UNM Clan Boss?

Adding this Ultra-Nightmare Clan Boss reference in case someone is curious how this same untuned team performed in UNM:

Just finished a run against Magic Affinity with the same exact team and they did 23.4M damage (picture below). In my notes I had written 22-23 mil from previous runs so this run fell in line with my notes.

This is not bad at all. It makes a comfortable 4 key UNM and with some improvements may be 3 key UNM. However, UNM is a completely different beast with higher requirements. 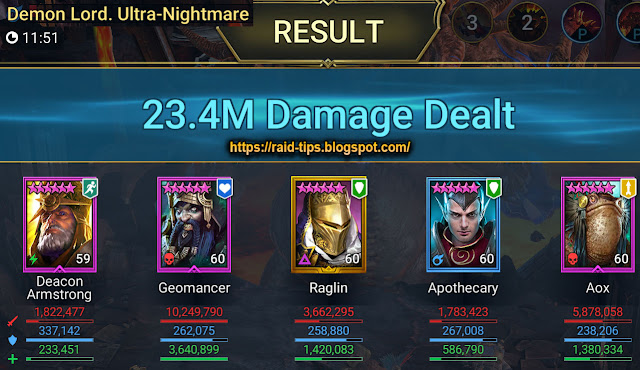 at September 02, 2021 No comments:
Email ThisBlogThis!Share to TwitterShare to FacebookShare to Pinterest
Labels: Clan Boss

Love is... a sacrifice to make her stronger and stronger. (Incubus). 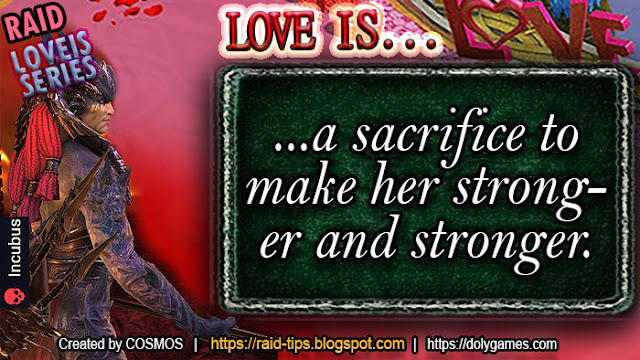 at September 02, 2021 No comments:
Email ThisBlogThis!Share to TwitterShare to FacebookShare to Pinterest
Labels: Fun/Funny

Tips and info about BOMBS in RAID Shadow Legends

I gathered some info from my research about bombs in RAID Shadow Legends which I share with you here (thanks written at bottom):

Bombs have their own multipliers

Not all bombs are created equal. Souldrinker bombs for example do very little damage. Same for Shazar bombs although I still think Shazar might be decent because positive affinity and his A1 can actually hit really hard if you get a few debuffs to stick.

Bombs scale with the champions ATK, they do not profit from DEF down. The hardest hitting bombs to my knowledge are those of Astralith. She is positive affinity towards the boss, doesn't need Accuracy and boosts your Turn Meter. Still really doubting that just doubling the bomb damage will actually do enough. Someone like Turvold will probably still just out-damage any bomb champion you can field. 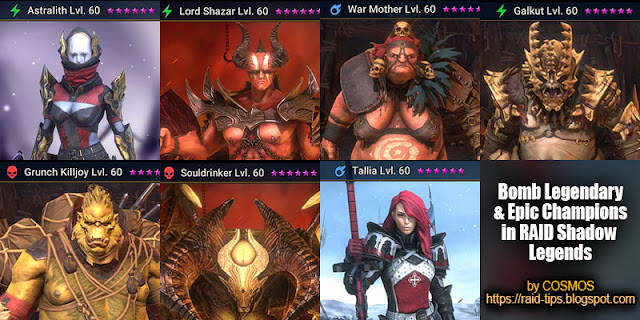 Skratch made an interesting point. He said War Mother does 100% more damage to bosses now and no one uses her. So will 200% more damage be enough or will we still find it is more effective to just bring the nukers in? (he asked about 200% because the new bomb boss takes 100% more damage from bombs)

I think people are severely overestimating that bombs are going to be actually viable at all.

at August 30, 2021 No comments:
Email ThisBlogThis!Share to TwitterShare to FacebookShare to Pinterest
Labels: Guides & Tips

Here are some tips for doing Clan Quests in RAID Shadow Legends in the cheapest way possible to help you preserve as much of your Energy as possible.

Place 50 or 100 Increase Defense in Tag Arena: this counts all champions so having 1 DEF+ champion in each of the 3 teams will give you 4 x 3 = 12 points for the quest per 1 battle.

Craft Epic or Legendary gear from Doom Tower bosses or other: can be done on a low Rank (3-4 stars) to make it cheapest. And of course don't waste any charms, just keep rolling until the needed gear appears.

(thanks kshoggi) Place 500 speedups or whatever: I used Apothecary 1 man team with heal 1st priority and speedup 2nd priority against an Arbiter 1 man team. Walk away for a half hour and then just manually fight to get the win. Got the defense one similarly with unequipped Sepulcher Sentinel + Apothecary and the shield one with Lodric + Apothecary.

Sepulcher Sentinel is not required - just pick a defense-up champion from your vault that will stay alive without doing much damage.

The difference between auto prioritizing heal vs only healing when low encompasses a lot of 1-man defenses that survive the former but die to the latter. With 100% Crit-built Apothecary on manual you can save the heal until 25% hp while you smack her with giant slayer autos.

Personally, my Lodric is rank 5, does 0 damage, and only attacks like one out of four turns if you set his priorities right.

For each of these, you may have to experiment to dial in the strength of your guys vs the defense. Add or remove gear. I found that Apothecary vs Arbiter defenses works well but there's bound to be plenty of options. Go in and test and make sure you can win on manual (don't win the series). Then make sure you won't win on auto after a minute or two. Then you can walk away for a bit.

Clan Quest: Placing X number of debuffs on a boss

(thanks akd90) For the "place X debuff on Y boss Z times" use multiple champions that can place that debuff to get multiple debuff procs towards the quest.

Kinda strange, but I noticed the “place X debuff on Y boss for Z amount of times” seemed to be completing in fewer runs than I anticipated. Then I noticed I had two champs that placed X debuff. The game seems to recognize a place as two different instances even if it’s already applied if it’s coming from two different sources, such as two different champions. So for example, an easy way to complete the “place 100 decrease speed debuffs on the fire knight 100 times” elite quest is to use two or even three different champions that can apply decrease speed.

Q: that's very interesting, thank you, do you know if it also works by speeding up champions to put the debuff faster? or does Champion ZZZ's debuff has to finish before he can apply it again for points?

A: The debuff doesn’t have to expire from what I can tell.